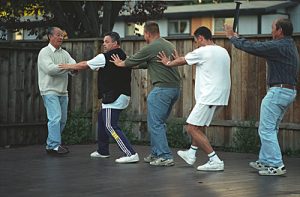 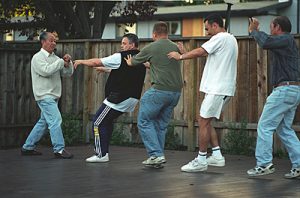 Master Liu demonstrating fa jin. Fa Jinmeans issuing or dispatching (fa) of strength or energy (jin) in Chinese and is part of the (advanced) practice of tai chi. The people in the pictures include Ugur Osman and Andy Harris from Wu (Hao) Tai Chi Association UK.

Jin is the result of combining hardness (bones) and softness (tendons and qi) accurately. It involves the loosening of muscles, sinking of qi, contracting of tendons, and the extension of bones–all at the same time, and at the moment when they can work together to

produce powerful force. As such, it requires a lot of techniques and responsiveness be able to control so many things so fast, and timing has to be very precise. Jin is an essential element of most internal martial arts.